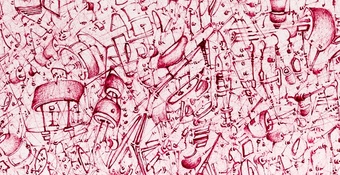 In traditional perspective drawing, there are good lines – those that convince the viewer, and bad lines – those that fall flat.  The merit of a line is determined by its relationship to other lines, and ultimately to an elusive dot someplace along the horizon line of the page.  My drawings map my pen’s search for that omnipotent spot.  What they uncover are chaotic webs of interconnected cables, twined threads of frenzy and order, forever bound in balanced paradox.  My pictures summon the viewer to become both architect and engineer tasked with plotting the complexities of wormholes, and more intimately, with mapping the blueprints of how it feels to be neatly tangled within the pages of a long pause.

Abruptly, the moment of looking is over; the witness, carrying only the residual memory of lines, red or blue, turns, and walks away.  It is in this aftermath of sight, in the ever-changing history of the stagnant past slumped against the continental drift, that hyperbole begins, and that the impact of drawing actually resides. The audacity that a small page of scribbles can stand amid the clamor of life is hinged upon the unsolicited testimony of one’s own voice, that persistent narration infusing sound into the surrounding noise.  Each picture, like the memory of having seen it, is an amalgamation of lines, connected fragments groping at the very texture of intangibility, and toward that ever vanishing moment which winches and binds us inside the woolliness of space and remembrance.
In a recent exhibition at the Arsenal Center for the Arts in Watertown, MA, she showed her series, Sixteen Million Lines in Search of a Horizon [Accompanied by the Unsolicited but Sharp Elbowed Manuscript: ‘Thread Count’]. The series was comprised of sixteen autonomous images arranged so that the titles beneath each piece threaded together to form a single poem.  She is currently working on a project temporarily called, The Grammar of Drawing: Drawing Drawing’s Double Entendre to the Drawing Table. Because tongue twisters can be a turn off, and the fear of affectation is real, she is also considering a second title, Drawing In: The Confrontation, Reconciliation, and Merger of Object and Action. No decision has yet been made, but it is very possible that she will draw from a different string of words entirely. 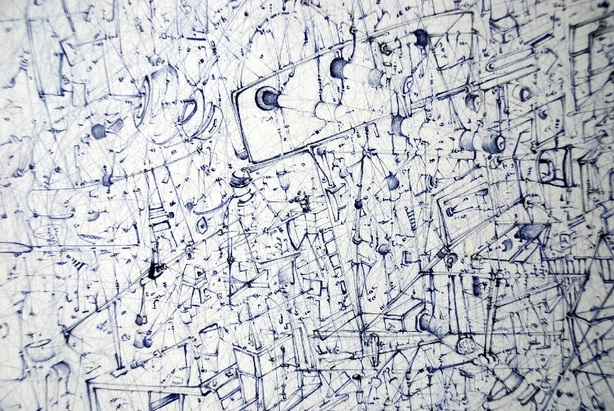